I have served at two National Parks as the Artist in Residence. My first experience was on Isle Royale in Lake Superior and then at Acadia in Maine. These were great opportunities within which I could freely structure my time and focus on my art. I was like a kid in a candy store given an unlimited budget to buy whatever they wanted. Aside from minor public committments, as Artist in Residence, there is ample time and opportunity to live in the back country.

The National Parks were formed in part through the influence of artists who traveled to America's most beautiful locations and created work to inspire audiences back home. Their work inspired decision makers and stakeholders to promote the idea of preserving America's natural splendors. Many of the pivotal paintings were created by artist's of the Hudson River School, and a class of art labeled as Romanticism as well as art considered to be Art of the Sublime, a movement that focuses on revealing the divine through the visual magnificence, power, and beauty of nature. 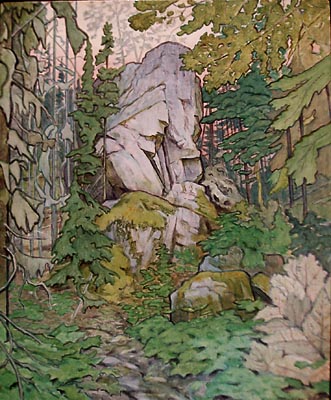 In 2006 I was selected to be the Artist in Residence on Isle Royale National Park in Lake Superior for two weeks in June. The experience was a rare opportunity to observe, draw, think, and explore, all while focusing on my art. The image you see to the left is a photo of the painting I completed and donated to the National Parks as part of the contract agreement in appreciation for the residency opportunity. In addition I gave two evening presentations to interested visitors. Aside from the two obligations, my time was my own and I had full freedom to pursue my nature centered art interests. I spent a great deal of time trying to better understand the pattern within apparent chaos of waves on Lake Superior.

On Isle Royale National Park there are countless possibilities for works of art. For me, the difficulty lay in excluding subjects as I pondered just what I might focus upon in creating the piece I'd dedicate to the park as part of my Artist in Residency agreement. Based on surveying works created before me I thought that focusing on some unique inland feature could help broaden the portfolio of art owned by the park. Many artist's donated water themed creations and though this seems ever so appropriate, hikers have a another sense of the place as well. I chose Monument Rock, a pillar of stone found along a trail littered with glacial erratic boulders in a forest section decorated with hanging lichens. The place had a sense of mystery and a timeless feel that almost suggested the presence of an ancient witness to countless seasons of changing land and weather. Or maybe I was sensing the watchful eyes of wolves that had been spotted in the area. 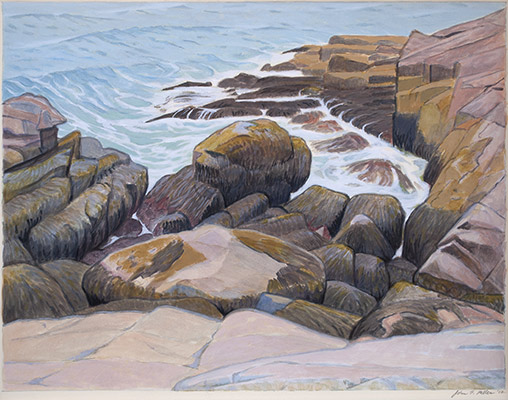 In August of 2011 I had the distinct privilege of serving as the Artist in Residence in Acadia National Park. My lodging was on the Schoodic Penninsula on the campus of the Schoodic Education and Research Center. I wandered and observed, sketched, revisited the same places frequently and was particularly taken by the show and hide nature of the tidal zone and water's edge. Familiarity was hard to come by even after visiting the same spots frequently. What I saw at low tide disappeared at high tide and my markers were hard to identify at times in between.

In this sea of ever changing views I depended upon my imagination to name and remember features. Bison on Schoodic focuses on one such area of the point visible when the tide is out. In this depression there is a large rock covered with barnacles, brown, red and green algae and from one perspective it looks like a big shaggy bison. I visited the spot time and again at low tide and high tide and watched the ocean surge and withdraw and bathe the rocky area at differing times each day. What grows low versus what grows high relates to the tides and how wet or dry the location might be and for how long. This is a zone of life along the ocean edge and although my bison may merely be a memory marker or a figment of my imagination, it is also very much alive.

Acadia is aesthetically, geologically, and biologically unique, as are each of our National Parks. However, along with Acadia's special physical qualities the park has a teaching focus with a research and teaching campus. The teaching program is dedicated to bringing art and science together as essential to the successful learning process. This emphasis perfectly suits my world view. I felt at home in the physical environs as well as in this particular philosophical environment. Combining Art and science in an education program makes perfect sense to me. I think that there is something useful in the right brain-left brain model suggesting that each brain hemisphere posses a dominant thinking function. This is proving to be overly simplistic but according to the model, the right brain dominates in what we refer to as intuitive or creative thinking and the left brain dominates in analytical thinking. If this model does serve a useful purpose in our sense of how we think, then it stands to reason that combining thinking processes while learning would complete the mind and take better advantage of full brain power. I myself have discovered large voids in my own understanding of something by making a model of that something or by illustrating or diagraming the idea, in short by trying to create an image of the thing I'm studying. As a visual artist I'm well aware of the strong link between vision and thought, between seeing and understanding. If I make something, create something, I have to understand parts to build the whole. If the parts don't fit, I'm clearly misunderstanding. Making or creating helps me learn because I have to understand spatial relationships along with conceptual relationships. By making a physical representation of something I'm studying, the thing itself becomes more real to me and my knowledge becomes more concrete.

I have a degree in Zoology as well as one in Art. I've been employed in research labs at Duke University and the University of Wisconsin in Madison where I now live. Now however, I make my living through art, design, and illustration. It is natural for me to combine analytical and intuitive thinking in everything I do. Much of analytic thinking involves training the mind to recognize the differences between things. Creative thinking encourages the making of connections and finding similarities between things. These two thinking processes can easily be combined. Teaching often involves analogy and analogy is the art of finding the things known and understood by a student to be able to effectively make comparisons with things not yet known by them. Analogy can be metaphor and metaphor is a tool of the creative arts. Art can help open up a world of understanding.

My wife and I were in Acadia as then tropical storm Irene moved north and we watched as the Atlantic became ever more turbulent. Making visual sense of that apparent chaos intrigued me. Countless others gathered at Schoodic Point to witness the building seas as well. There is something mesmerizing in a meditative and peaceful way in watching those powerful waves even while the dangerous powers of those seas simultaneously inspire awe and respectful fear. I contend that the unpredictable complexity of the relationships between waves leaves us with a sense of wonder because we can't grasp the underlying complex order behind the wave patterns although order does exist and we sense it. The dichotomy between sensing order through intuition versus the challenge to conscious understanding is the very thing that mesmerizes us. We sense order but don't understand it. Fire does the same thing to us as can clouds. Yet no wave is ever anything other than a wave. No wave form strays from the possible. Waves are waves. Yet they do not repeat in mechanically predictable ways.

The key value to an Artist in Residency is in the establishment of a sense of home. Residency is a place to call home.Traveling through an area by tracing one thin line of experience is not the same thing as residing in it. Witnessing the passage of time over the course of a day, a week, a month; experiencing changing weather, changing light, and the increased opportunity to witness the movements of the creatures living in a place is inherent to residency. It takes time to become familiar with a place.

Of course my residency in Acadia was a mere introduction. 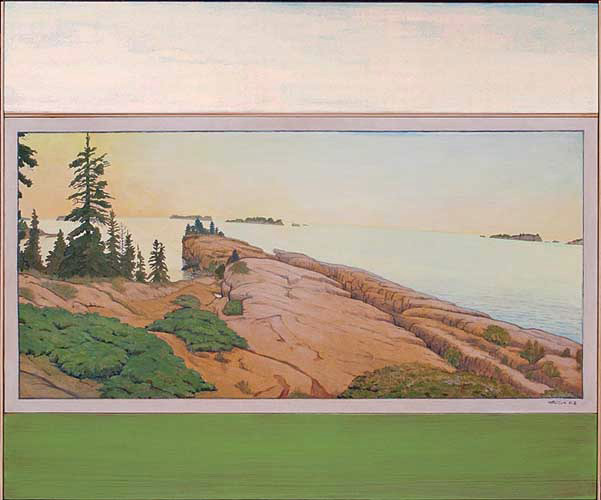 This painting depicts Scoville Point which is within one hundred yards of the Artist in Residency cabin I called home for several weeks in June of 2006. It's an impressive slab of stone that tilts toward the East on the Northern end of Isle Royale. After painting this piece I framed it with both a nod to the East and to my Horizon experiments that I mention in the sculpture links.

My mother spent a meaningful year in China after she graduated from Carlton College and was on the last boat out before the Communist take over. She loved China and brought back furniture, rugs, and art that graced our home as I grew up. Chinese painted scrolls are traditionally mounted with color fields above and below the painted art and these fields represent the heavens above and the earth below. These art pieces combined representation in the painting with abstract formal and decorative shapes that were part of the mounting. The Chinese paintings represented ideas in ways that Western art did not. The abstract qualities of the presentation were sophisticated in what we might call modern ways. I really liked the presence of the pieces. They had a sacred object feel in a way that mere pictures seldom do.

Many early Chinese landscape paintings were intended to inspire thoughtful contemplation, a goal I hold dear in making my own art. Some of my best ideas come from experiences in the outdoors contemplating natural events and it is my hope that art inspired during such observations could retain some essence of my thoughts and that these could be sensed by receptive viewers.

Gray Jay Graphics is a name I use to help you find me in the crowd but I really do business as John Miller. My personal name is pretty commonplace so I can be hard to find without another way to identify me. I work in many different styles and with many different mediums creating fine art as well as graphic designs explaining ideas. All content © John Miller unless otherwise noted.